Cherry pick from 1,000s of pristine wild, full-service and free campsites throughout Europe on this driving tour selection for motorhomes. From a low-mileage Emerald Isle languish and a heavenly gastro-culture Normandy getaway – to a spectacular northern Spain escape and a whirlwind Continental sightseeing blitz, here’s how to find out first hand why luxury motorhome travel is catching on like wildfire.
Share this article 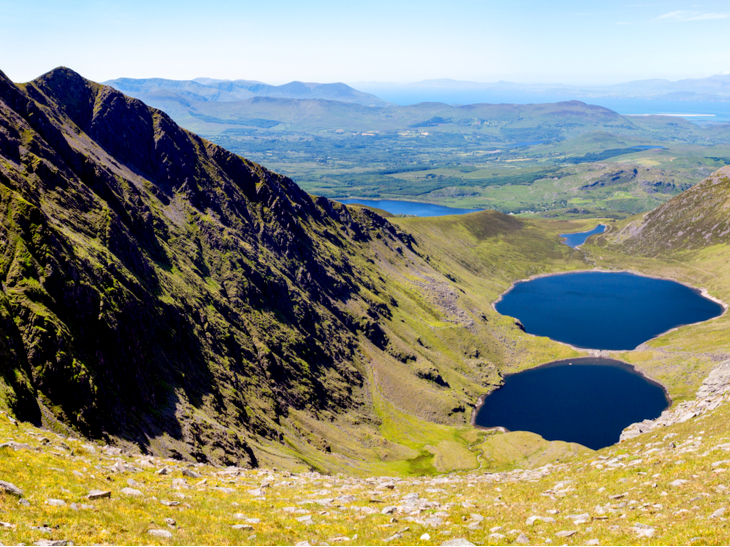 Alight at Rosslare and, if you’re a sea, sand and cinema type, make a short detour to the Wexford area. Stretch your ferry legs on Curracloe beach, where the epic D-Day landing scene for Oscar-winning Saving Private Ryan was filmed for a cool US$12 million. Stop off at Waterford Crystal for a tour, including glass blowing demo, or simply purchase a piece or two of the world-famous crystal.

Travel westwards to Killarney and spend the night at Fossa Holiday Park, overlooking the iconic MacGillycuddy Reeks on the edge of the Ring of Kerry. Just five minutes stroll to Lough Lean and only three miles from the lovely mountain road pass over the Gap of Dunloe, Fossa has plenty of what motorhomes need onsite, with fresh water, free WiFi, sanitation blocks and a drying room facility, plus, if you fancy putting your feet up, taxis and day trips can be arranged and there's even public transport with a bus stop outside the entrance. 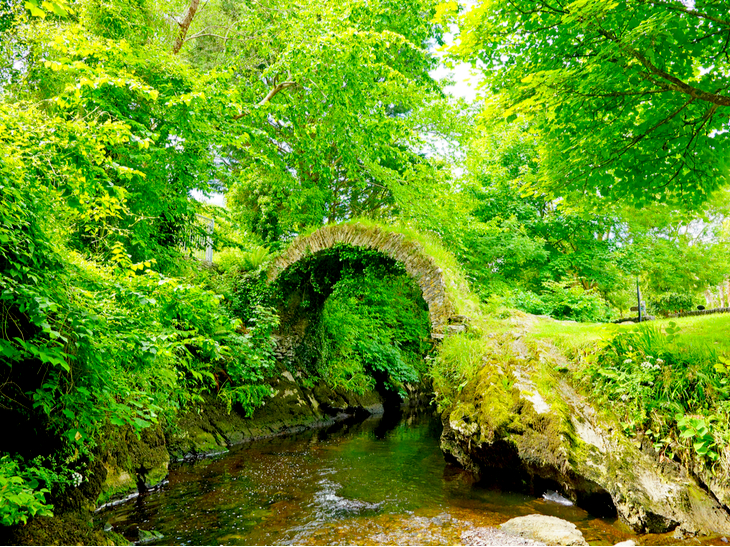 Rise the next morning and – whether it’s a weekend, a week or a longer stay – the 200-km Ring of Kerry with its towering mountains, hiking trails, deep lakes, lush forests, rugged beaches, elegant rivers, old stone bridges, and pretty little towns with colourful houses is a wild unwind mecca for magical Europe motorhome road trips. 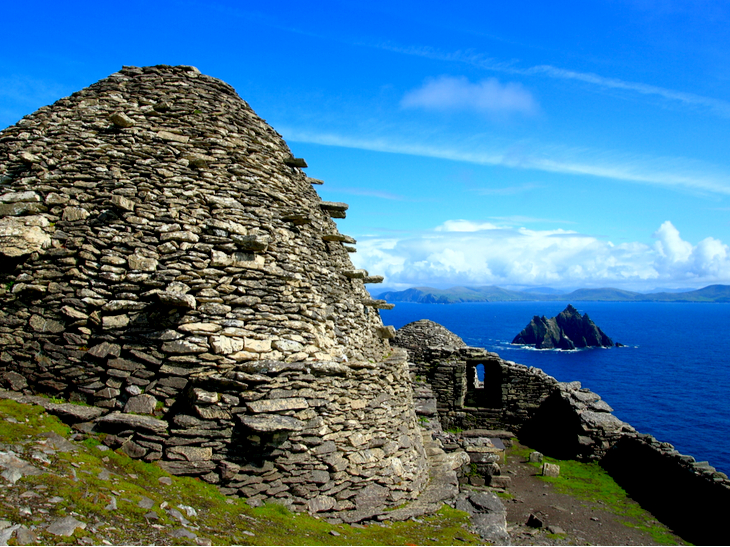 Discover you have to Skellig islands

Step even further into otherworldly wonder. Park the camper and take a boat across to the Skellig islands, home to puffins, beehive shaped dwellings, a 1,000 year-old monastery and scenery immortalised by Star Wars: The Force Awakens. 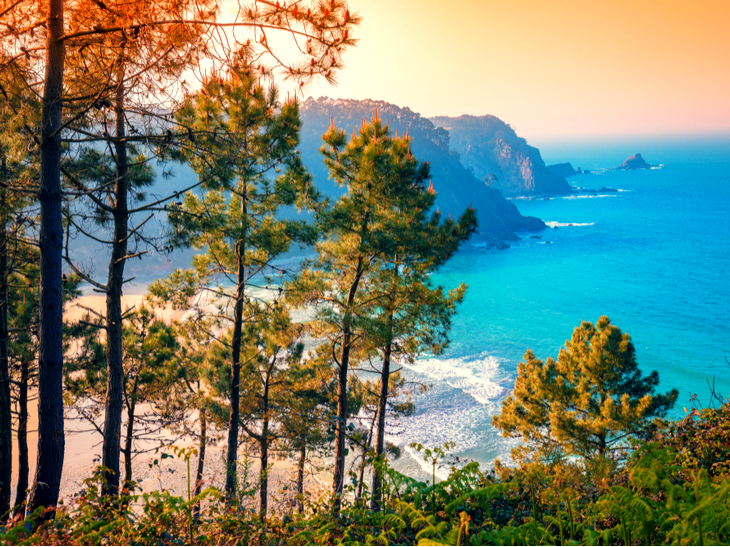 Sunset falls on firs, in a forest overlooking The Dinosaur Coast

If you have two weeks plus for a motorhome trip to Europe, the green forests and spectacular coast of northern Spain is arguably the most picturesque destination of them all, with miles of pristine beaches and over 10 national parks. Take the overnight ferry from Portsmouth to Santander in Calabria and start your road trip itinerary by visiting the city’s gorgeous oceanfront Palace of La Magdalena. 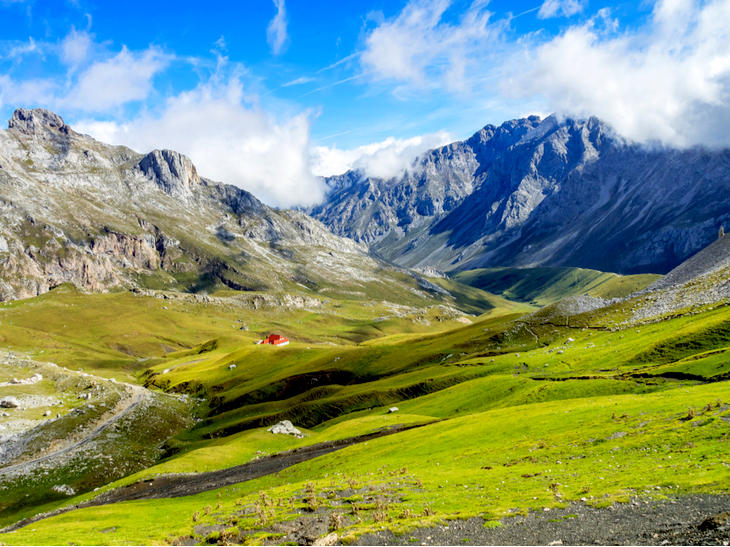 Peaceful valley in the Picos de Europa, or Spanish Dolomites

Aim next for the region of Asturias and La Costa de los Dinosaurios (The Dinosaur Coast) and ravishing Ribadesella. This epic coastal driving tour now unfurls its full glory, with dozens of fantasyland beaches glittering through the window like unique precious gems – here an exquisite sparkling white-sanded cove, there a vast golden expanse backed by forests of eucalyptus. This is motorhome travel at its best. 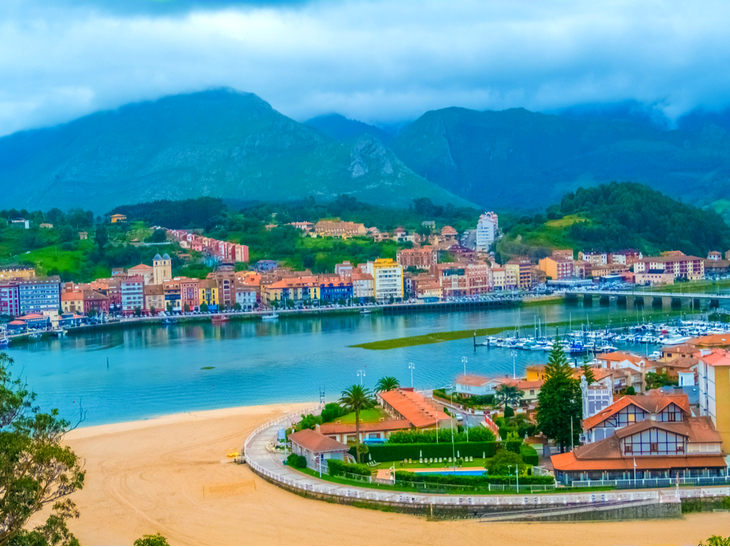 The former fishing town of Ribadesella

The best campsite for motorhome parking in the Ribadesella area is the pristine, family-run Camp Playa Sauces, a lush green oasis backdropped by a eucalyptus forest and an easy half-mile walk from the beach and fishing village. There are plenty of amenities on offer while staying at Playa Sauces and the charge is only €7.50 per night per person (high season).

Just a short saunter from the beach takes you to the incredible Tito Bustillo Cave, a World Heritage Site with rock paintings dating back 33,000 years, perfectly preserved bone harpoons and a goat’s head carved from a staghorn.

Head up to nearby Tereñes and be awestuck by the footprints of three-toed bipedal and quadrupedal dinosaurs. 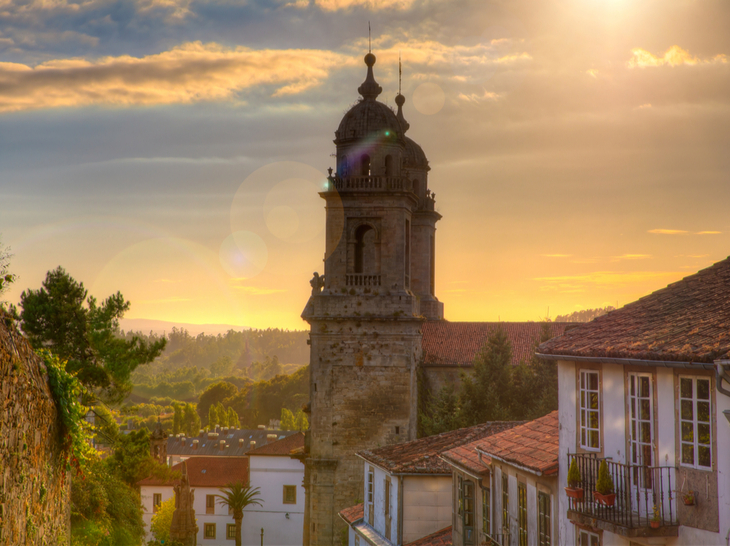 Next, journey inland into Galicia, for Santiago de Compostela, the famous pilgrimage city just brimming with architectural wonders. Hit the old town for Renaissance courtyards, baroque buildings, stone arcades and the Obradoiro square, which offers the best views of the majestic western facade of the city’s multi-spired cathedral. Treat yourself to perhaps the best tapas in northern Spain at O Dezaseis (Spanish for 16). Try the speciality pulpo (octopus). Cooked until tender, tossed on a super-hot griddle and sprinkled with smoked paprika, it’s simply amazing. 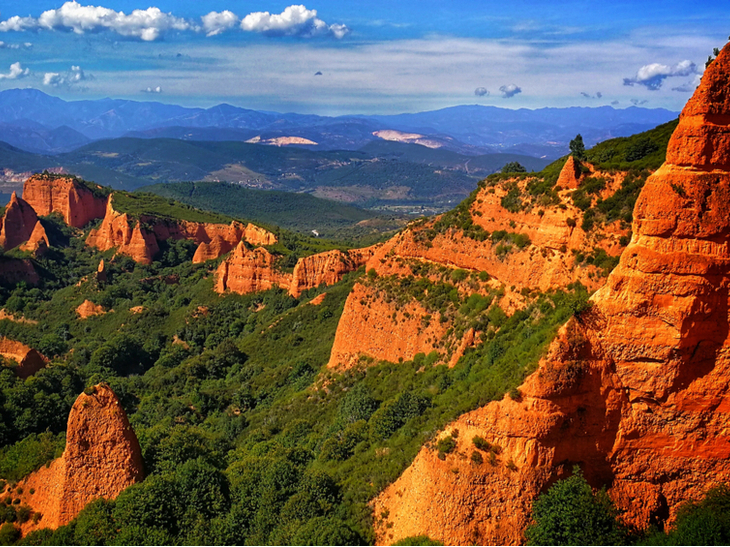 Return to Santander via the Castille y León region, the home of Spain’s most magnificent Gothic cathedral, the majestic medieval city of Burgos and the weird and wonderful World Heritage landscapes of Las Médulas. 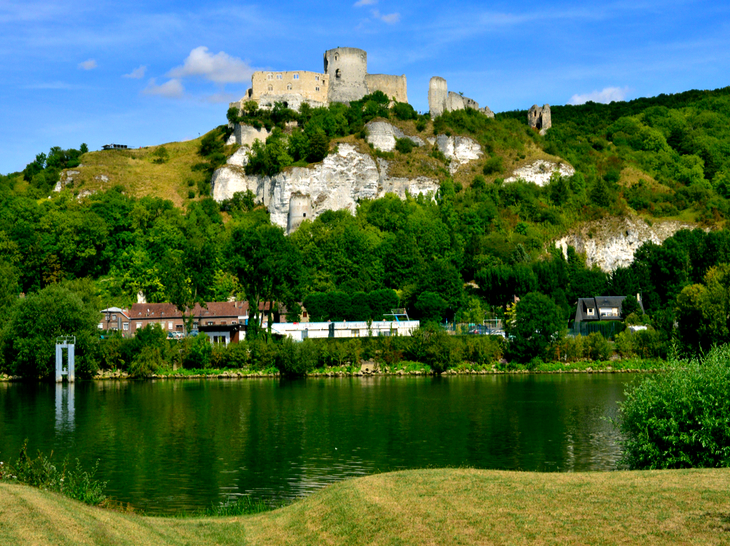 Castle of a Lionheart

Poole to Le Havre sets you ashore in France’s first contemporary UNESCO World Heritage city. Le Havre’s très bonniness is a sign of things to come on this perfectly prepared motorhome holiday. After coffee and croissants in the picturesque and much painted port of Honfleur, head west through the Route Cidre and Route Fromage area for Falaise, through country lanes and quiet vales of the Pays D’Auge, where apple orchards conceal some of the prettiest half-timbered buildings you’ll ever see.

Falaise, birthplace of William the Conqueror whose medieval castle still watches over the town, makes the perfect base to tour and explore the hill country of la Suisse Normande, where lofty crags tower above undulating pastures and wooded valleys that might have starred in The Sound of Music movie. 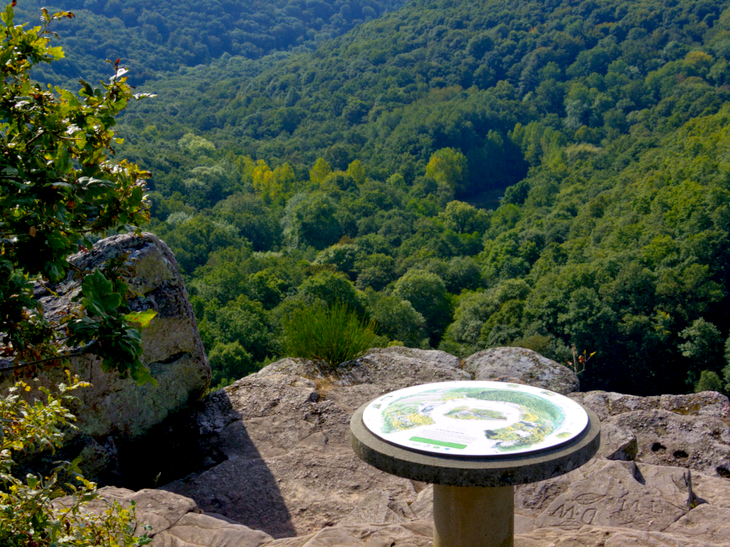 Next, drive inland eastward via the castle-sprinkled, lace-making town of Argentan for Les Andelys and the aire at Camp des Trois Rois, set on one of the wandering Seine’s prettiest loops and overlooked by Chateau Gaillard, the stronghold of Richard the Lionheart, an imposing medieval castle listed as a monument historique by the French Ministry of Culture. 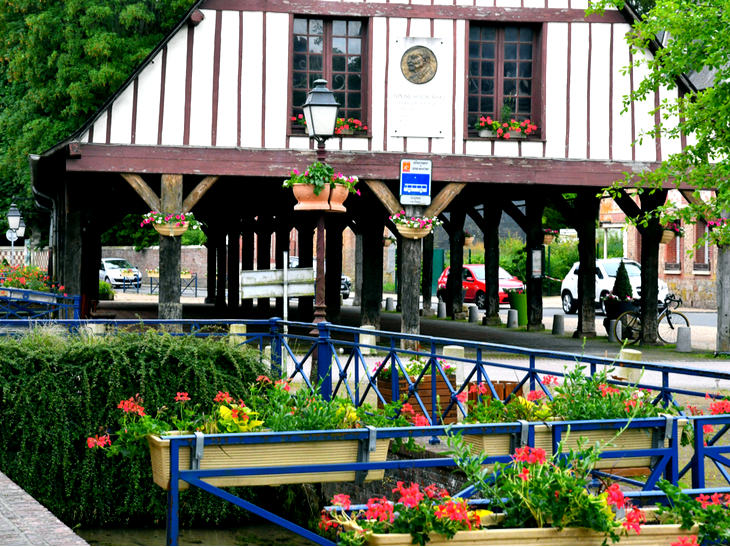 Our travels continue northwest to Mailleraye-sur-Seine and Aire de Camping Car, a lovely beauty spot where you can overlook either the marina or the Seine. A spot nearby that’s not on the tourist trail and well worth popping into, is non-profit Caress de Tigre, where you can experience rare white tigers. Next up, is the aire at Clères. You’re really here to take the air of Rouen, a heady aroma arising from the finest cuisine in all Normandy. 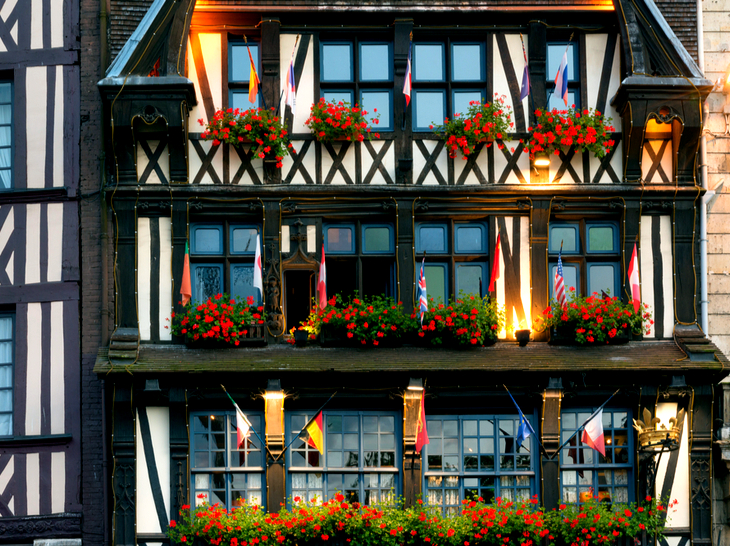 Dine like royalty at La Couronne (The Crown) restaurant in Rouen

Follow your nose through the old antiques quarter Place du Vieux Marché, where Joan of Arc was executed, to the half-timbered La Couronne restaurant, which has been mesmerising travellers such as Salvador Dalí and Patti Smith since 1346. US TV chef Julia Child ooh-la-la’d over this auberge so much, there’s even a menu named after her, starring a bewitchingly buttery sole meunière and delicious fresh Normandy oysters. Accompany with Camembert and Calvados to bid Normandy adieu with a regional flourish. 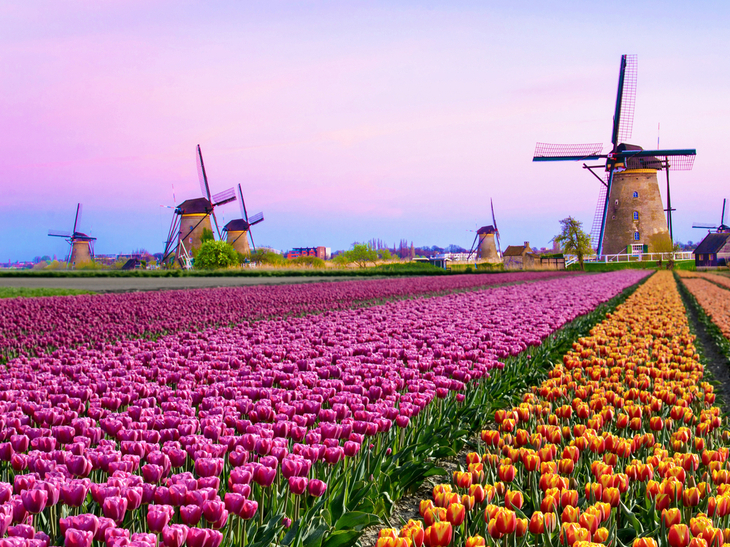 Bewitching windmills and blooms of Kinderdijk

Alight in Calais and drive through to Bruges for beautiful old quarters, mayonnaise chips and smoky beers. Building buffs will delight in the Basilica of the Holy Blood and the Church of Our Lady. Cross into the Netherlands to Kinderdijk with its wonderful variety of windmills via Dordrecht, Holland’s oldest and prettiest town. Don’t miss the Keukenhof Gardens, the biggest bulb show on earth, where irises, lilies and tulips cluster like jewels against lakes, fountains, windmills and ancient woodland. 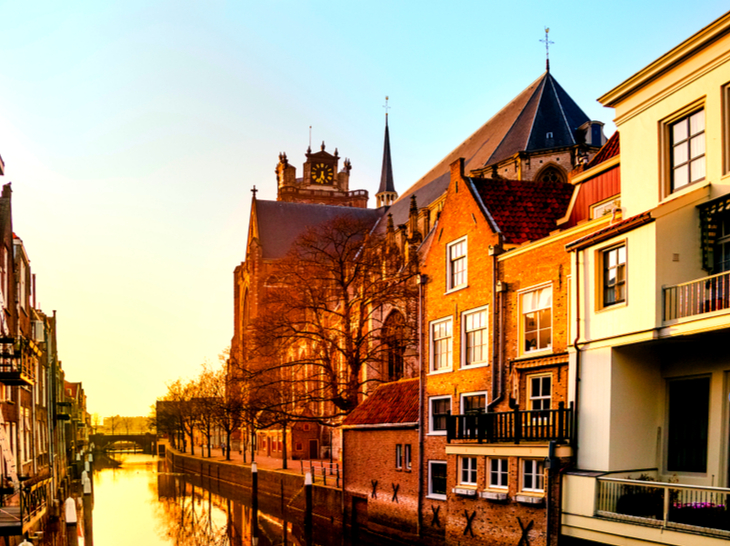 Canals of Dordrecht, the oldest and most comely town in The Netherlands

Next stop, Amsterdam. Hire bicycles (a must for any Amsterdam trip itinerary) and explore. Visit the Van Gogh Museum, take a boat trip on the canals to the floating flower market, and experience the night life at the lively Leidsplein Square area. Leave Amsterdam heading south east, driving through tulip fields and past windmills, stopping in beautiful little villages to buy specialty Dutch cheeses like Gouda or Edam. Perhaps stop off at Arnhem, site of WWII's Operation Market Garden and home to The Open Air Museum. 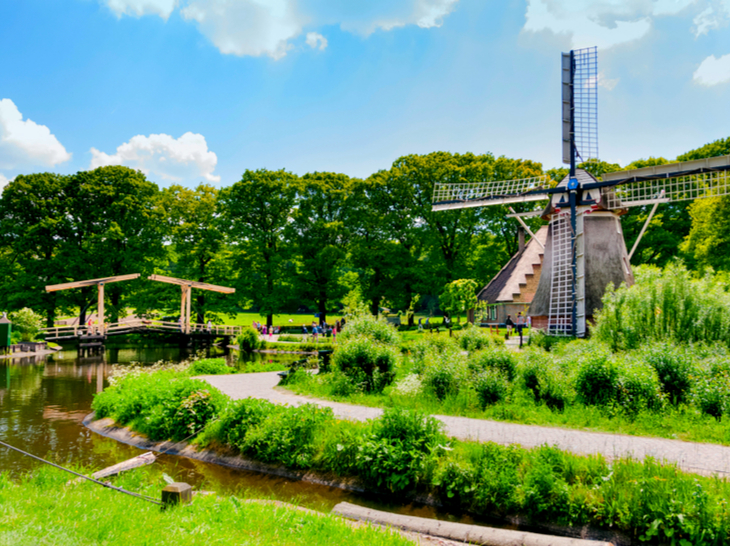 The Open Air Museum in Arnhem

Say guten tag to Germany and travel through Bonn and Frankfurt, heading south towards the start of the Romantic Road in Würzburg. Perhaps stop along the way in Koblenz beside the Moselle River, where you can even secure free overnight parking on Pastor Klein-Straße, close to the natural history museum that focuses on fish migration in the river. 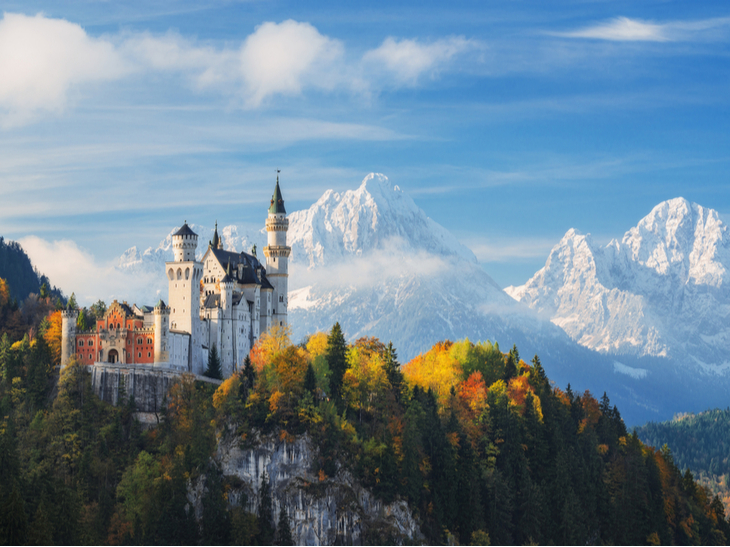 Continue to ‘Fairy Tale King’ Ludwig’s Schloss Neuschwanstein, the amazing 1800s Romanesque Revival hilltop castle that inspired the Walt Disney version, soaring above the good village of Hohenschwangau. Cross the Austrian border and into the Alps for the young Mozart’s onion-domed city of Innsbruck. 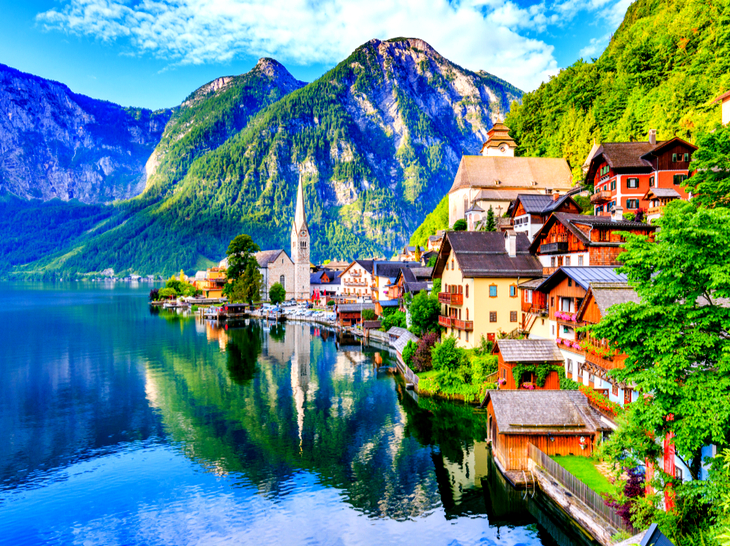 If you’re planning on spending more than two weeks on your European adventure, take a detour east to Austria’s Salzkammergut area, a World Heritage location of fragrant fir forests, lofty mountains, crystal-clear lakes and pastel-hued inns. As you’re in the area, visit Salzburg, ‘the heart of the heart of Europe’ filled with striking castles, palaces and the Salzburg Cathedral. 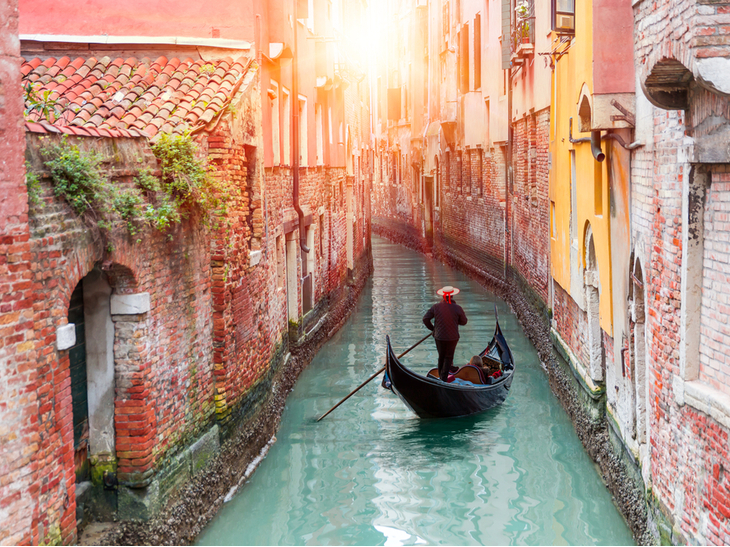 Sometimes, only sometimes, its fine to leave the motorhome on the mainland

Set off south into Italy for a city so enchanting that Charles Dickens posited even ‘opium couldn't build’ it – Venice. The fantastical cityscape of palaces, cathedrals and towers that seem to float on water defies belief, and a good local guide is recommended to get the best out of this waterworld. Take time to enjoy an espresso at the same 18th-century café frequented by Casanova. Wander across the Bridge of Sighs. Stroll along the Rialto Bridge and find hidden squares, enchanting old shops and visit cosy trattorias serving genuine Italian casa cucina (home cooking). 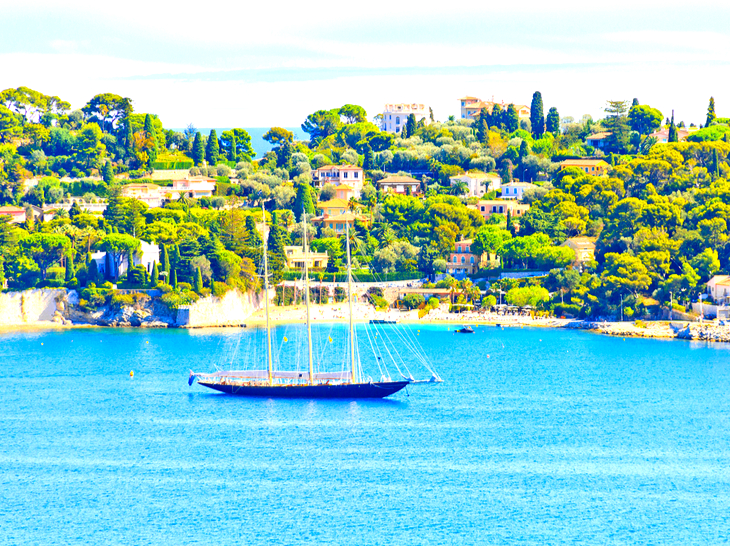 Cap Ferrat, the maritime Beverley Hills of the French Riviera

Leave La Serenissima for the home straight. Plan your GPS for locations including the French Riviera, home to the elegant winter and summer resorts of Nice, Antibes and Cap Ferrat, the millionaires’ playground of Monte-Carlo, the rugged hinterland of the Provençal Alps, the beaches of Saint-Tropez and the ancient hilltop towns of St Paul and Tourrettes-sur-Loup. 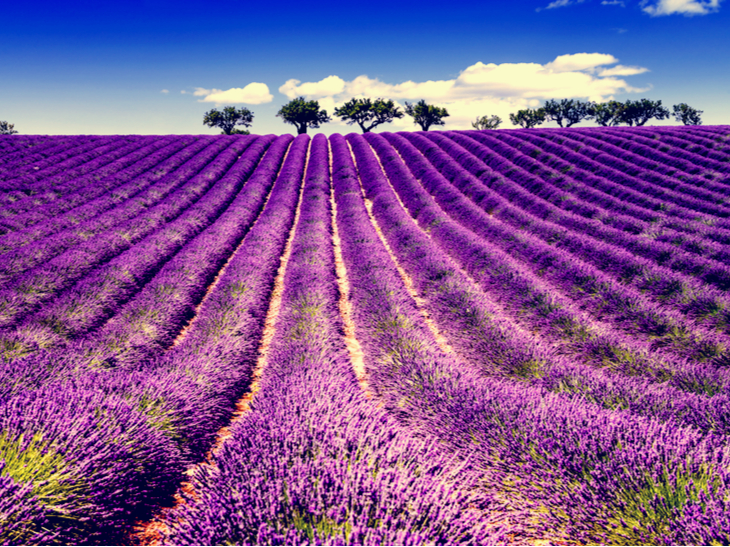 The light & the lavender, just a couple of Provence's many charms

A great concept and something you’ll find very handy while you’re in this region, is to become a member of France Passion Formula where for a small fee you get free overnight parking in over 2,000 farms and vineyards. Journey next into Provence and up through the wine regions of the Rhône, Burgundy and Champagne, taking in the magnificent Roman monuments, fields of lavender, apricots and cherry trees, perched hill villages and Mediterranean mountain landscapes that inspired the Impressionists. Take time out to enjoy a picnic lunch on the banks of the Sorgue, washed down with wines from the Rhône Valley and Côtes de Provence. 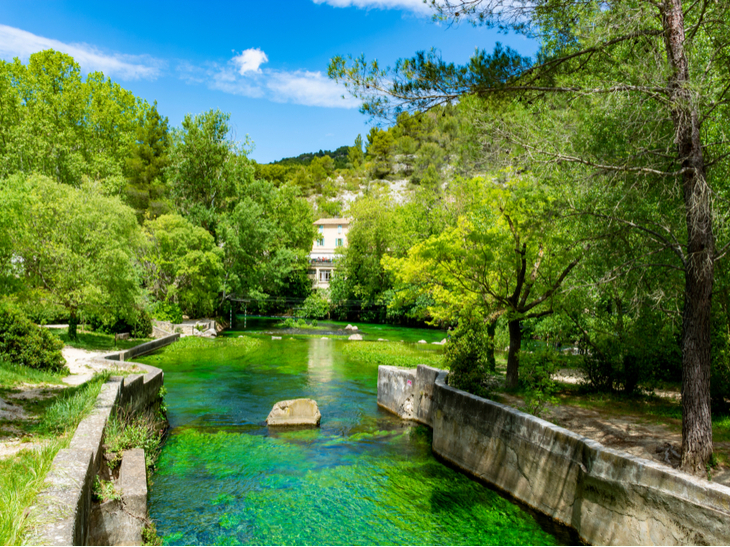 A Pan-European driving tour at your own pace in your own luxurious space? It's the ultimate road trip, so what are you waiting for?

Motorhomes vs Caravans: the Battle for Supremacy