Before Athens flourished into a philosophical powerhouse, before Rome mushroomed into the axis of an empire, the city of Syracuse was the envy of the ancient world.
Share this article

This illustrious city set on Sicily’s Ionian coast was founded by Corinthian settlers some 2,700 years ago and remains a fascinating window into the past. From the old quarter islet of Ortygia—which connects to the mainland via Ponte Umbertino bridge—to Syracuse’s rural outskirts lie Greek temples, Roman amphitheatres, Byzantine castles, Baroque churches and many other historically significant marvels that have earned the city UNESCO World Heritage Site status.

But Syracuse is not only about past glories. Today, this golden city by the sea has found favour with holidaymakers seeking a calmer alternative to bustling Palermo and chaotic Catania. Here, quaint cafés spill out onto sun-flooded piazzas. Artisan gelaterie pop up on unexpected corners. Sandy beaches and rocky lidos rim the coastline, serving up a refreshing beach-and-city cocktail for a Mediterranean getaway like no other.

Discover the true spirit of Syracuse with a little help from these hand-picked essentials. 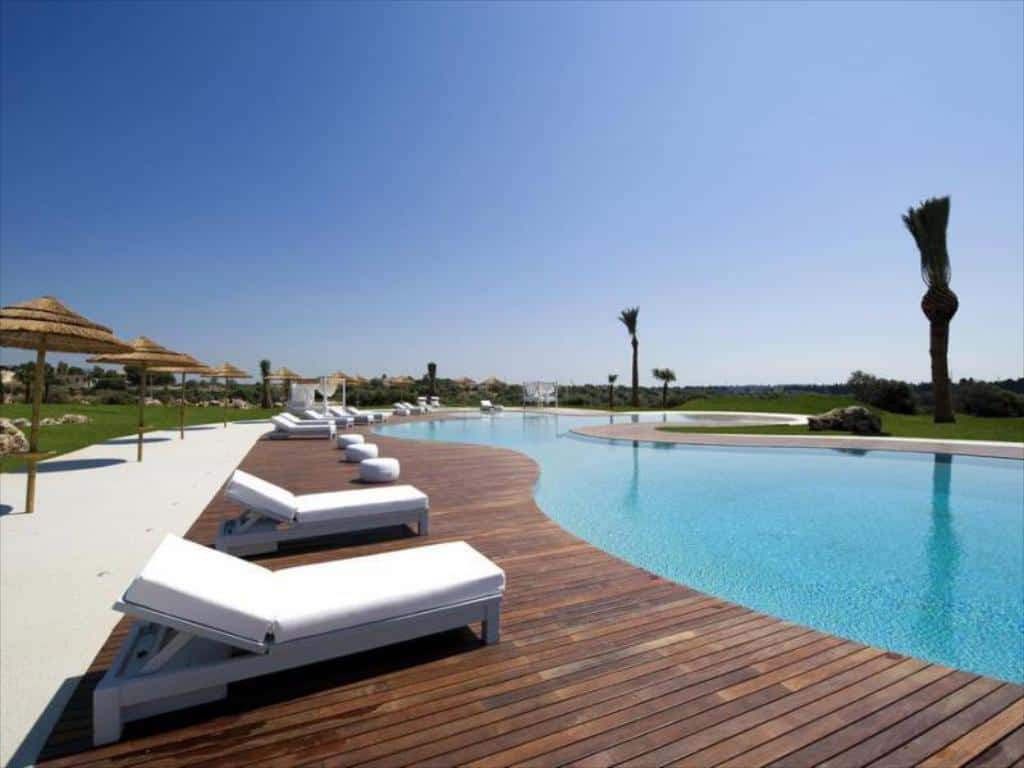 Give your Syracuse sojourn an authentic Sicilian twist with a stay at the luxurious Hotel Borgo Pantano. This boho chic 1800s boutique farmhouse is set in the heart of the Ciane and Saline nature reserve, home to meditative vineyards, papyrus-fringed salt marshes and the mythical Ciano river. Wake up to breathtaking views of shady citrus groves and fragrant olive trees. Spend an afternoon soaking in a soothing Turkish bath at the on-site wellness spa. And tuck into the finest regional produce—freshly caught seafood and local mountain meats—with an al fresco meal at the Luigi Capuana & La Terrazza restaurant, renowned as one of the finest eateries in Syracuse Sicily. 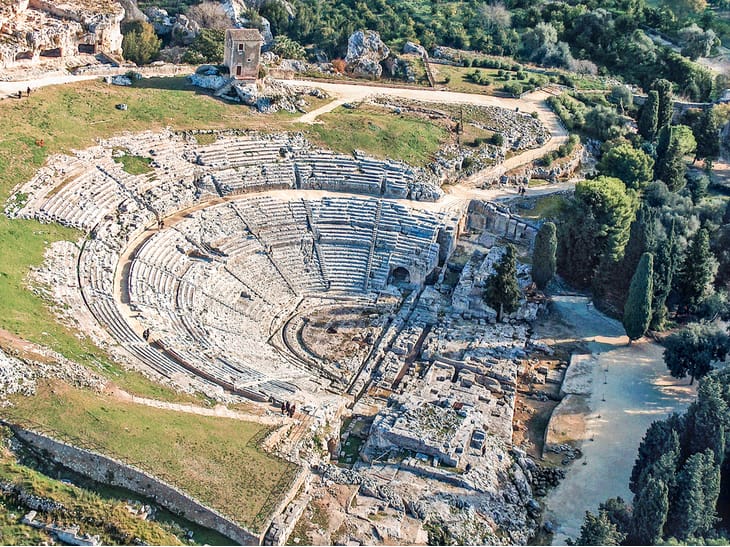 Syracuse is a city of many cultural legacies. Begin your journey down its multifaceted timeline with a trip to the Neapolis, a classicist’s wonderland. Within this hallowed archaeological park lies the Teatro Greco, an impressive 16,000 capacity amphitheatre that was chiselled out of the white-rock hillside in the 5th-century BC. Wander through the catacomb riddled quarry of Latomia del Paradiso and give the thumbs up (or down) to the oval-shaped Anfiteatro Romano, once home to bloody gladiatorial games. Elsewhere in the city, you’ll find the ancient ruins of the Temple of Apollo, considered to be one of Sicily’s most important Greek monuments. And buried some 20 m beneath Ortygia’s former Jewish ghetto is Europe’s oldest miqwe—ritual baths continue to this day to bubble melodiously with fresh water.

The Ear of Dionysius 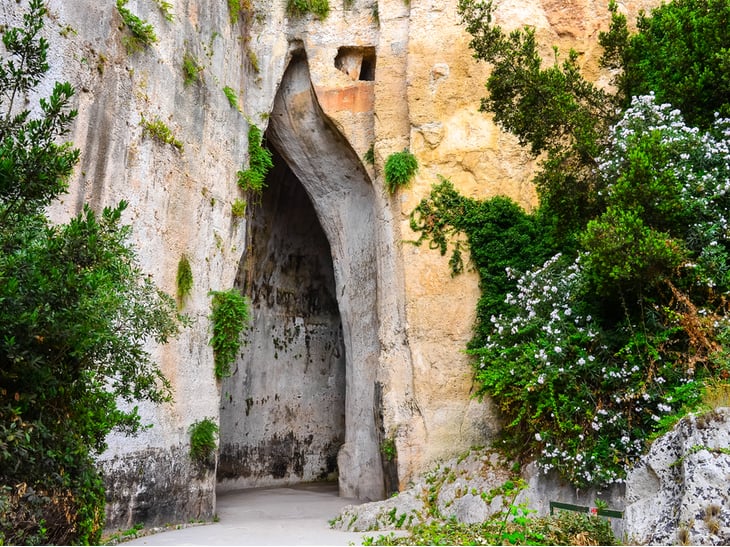 When inside the Neopolis, be careful not to divulge any intimate secrets while passing through the Ear of Dionysius. This massive man-made grotto amplifies even the most hushed of utterances. Legend has it that Dionysius I, the Greek tyrant of Syracuse, imprisoned enemy captives here. From a special crevice that burrows deep through the cliffside, he’d eavesdrop on their mumblings and whispered machinations, gaining precious intel on his adversaries. With such skulduggery, it’s no wonder Syracuse went on to become the mightiest of Greek colonies under Dionysius’ despotic rule. 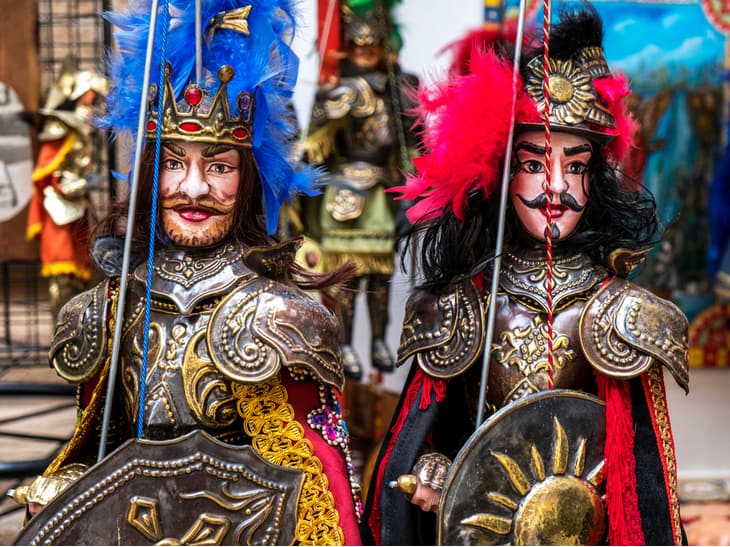 Epic battles are waged to seize Sicily. Lovelorn chevaliers warble ballads to blushing maidens. And masterful swordsmen slice each other limb from limb. This is just a typical evening at the Opera dei Pupi. Sicily’s history of irreverent puppet opera dates back to the early 1800s, when troubadours would roam from town to town puppeteering on the back of intricately painted donkey carts. Gaining popularity, the entertainment eventually moved from the streets into the teatrini. While Sicily’s great puppet troupe families have died out, the marionettes remain alive and kicking (figuratively speaking at least) in a handful of dedicated theatres around the island. Syracuse has bragging rights to two of the finer ones with the Compagnia dei Pupari Vaccaro Mauceri and the Compagnia Marionette Don Ignazio Puglisi. 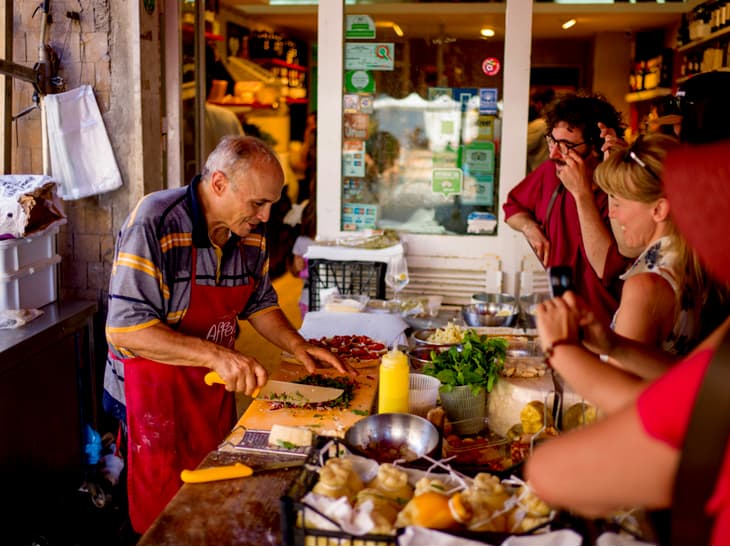 Get in step with the pulse of Syracuse with a trip to Mercato di Ortigia on Via de Benedictis, open daily between 7 and 2, bar Sundays. Merchants here are showmen. They bellow out bargains. They serenade passers-by with jolly ditties. And, as you’d expect, they gesticulate with all the am-dram theatricality of street mimes. As you stall-hop, you’ll be offered enough sundried tomatoes, olives and focaccia samples to throw an impromptu picnic. But should the lunchtime pangs kick in, you might want to hold-off on the freebies and make a beeline for Caseificio Borderi instead. This little sandwich shop, run by the peppy Burgio brothers, has become a local legend. Sink your teeth into giant bread rolls bookending a colourful, freshly-prepared Jenga-tower of cured meats, cheeses and veggies. Buonissimo! 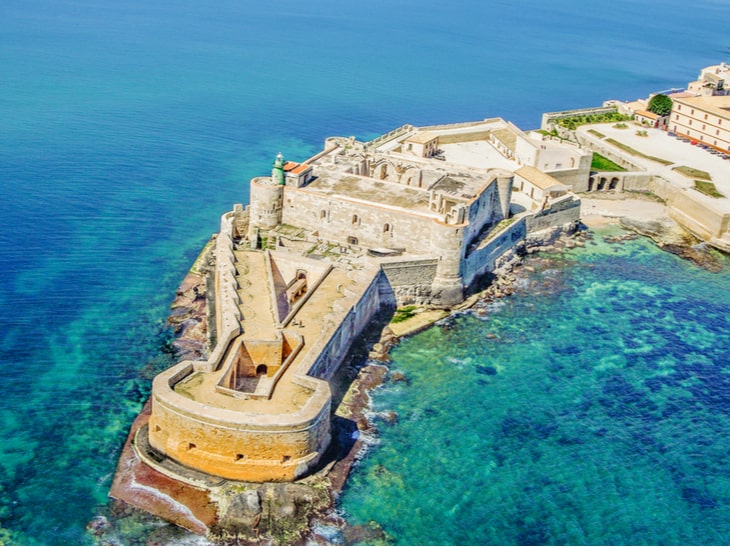 Explore Syracuse’s shoreline secrets on a fascinating boat tour departing from Ortygia’s pretty harbour. On your Syra-cruise, you’ll stop off at the impressive Castello Maniace that guards the island's southern tip. The fortress bears the name of George Maniakes, the Byzantine general who besieged the city in 1038. From here you’ll sail on past formidable 16th-century Spanish bastions to reach the secluded grotto marine. Dripping with stalactites, the walls of these marble sea caves give off otherworldly hues of greens and blues and purples. Peer over deck to glimpse the parazoanthus axillae, an oft-seen amber coral flower that glows like a pot of gold on the murky seabed. It's also the perfect starting point for a sensational yacht trip. 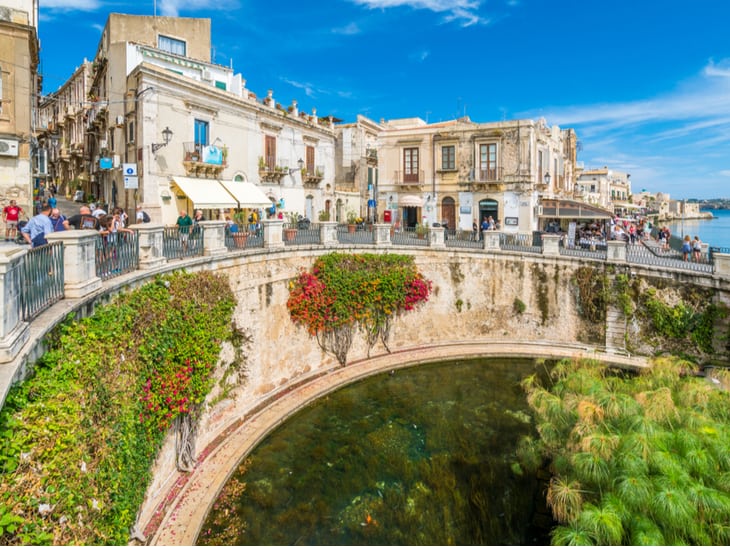 Any trip to Sicily deserves a little gelato indulgence; and Syracuse boasts some truly exquisite ice cream parlours. Try scoops of uniquely Sicilian flavours such as creamy cassata sprinkled with a jewel box of dried fruits, or a subtly sweet ricotta and pear option. As for the perfect spot to enjoy your icy treat, head to the Fountain of Arethusa. It may not look like much, but this papyrus sheltered pool is of godly stock. According to Greek myth, when the nymph Arethusa fled her home in Arcadia beneath the sea, she surfaced in the fresh waters of this very fount in Ortygia. The fabled fountain has been immortalised in classic poems by Virgil, John Milton and William Wordsworth. Recite a dreamy couplet or two while strolling along the scenic Arethusa promenade by the coast. Sunsets here are especially pretty.

From its epic history and magnificent ruins to its charming markets and uniquely Sicilian culture, Syracuse has something for holidaymakers of all types. Take your Syracuse city break to the next level of luxury by joining Azure X today.

Why Malta is a Great Yachting Destination