Paris and Rome may continue to steal the limelight, but Budapest is a Central European marvel that easily gives these metropolitan heavyweights a run for their money.
Share this article

The Hungarian capital is quite literally split into two, Buda and Pest, with each side stretching along the adjacent banks of the iconic Danube River. But the separation goes deeper than mere geography alone, as each semi-city offers up its very own quirks and charms.

Suburban Buda is a historical wonderland of castles, medieval streets, grand houses, museums and Roman ruins. Pest, on the other hand, is an altogether more bohemian affair with its scenic riverside promenades, flea markets, offbeat pubs and chic cafés. Budapest is also famous for its abundance of hot springs, with indoor and outdoor thermal baths scattered across the capital.

This luxury city-break guide will get you acquainted with the best of Budapest faster than you can say, ‘Rendelhetünk egy pohár Palinkat?’ Incidentally, that phrase will come in handy at any local ruin bar. Scroll down to find out why (You can thank us later).

But first, where to stay? Buda or Pest?

Revel in Riverside Splendour at The Aquincum Hotel in Buda 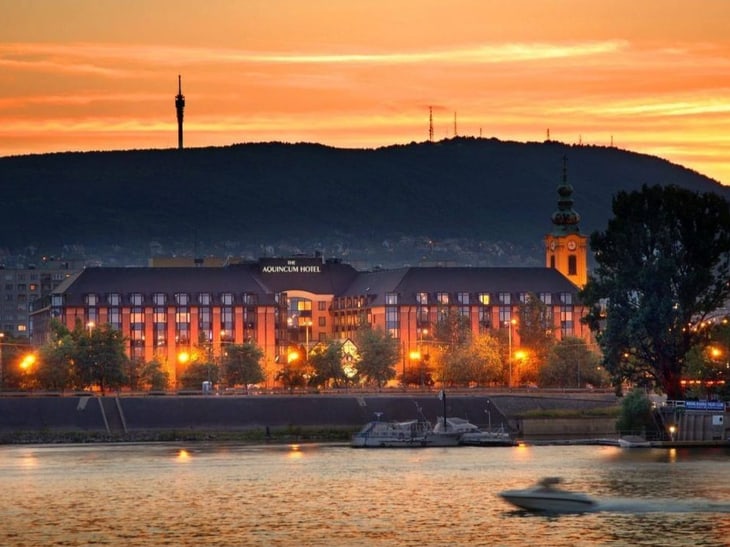 The Aquincum is well located, right on the banks of the River Danube.

If you want easy access to many of the area’s finest attractions, then the contemporary styled Aquincum provides the perfect setting for your luxury Budapest visit. Indeed, the hotel’s namesake 2nd-century Roman ruins are only a stone’s throw away. Idle away an afternoon in the hotel’s soothing thermal baths. The waters here are replenished directly from Margaret Island, a forested islet opposite the hotel which is well worth a visit. Here you’ll discover an art nouveau water tower, a 13th-century Dominican convent and a small zoo. Foodies staying at the Aquincum will also love the delectable Hungarian food at the on-site Aspicius restaurant, which showcases the finest local cuisine using produce sourced from nearby farms.

Luxuriate in Old World Opulance at The Corinthia Hotel in Pest 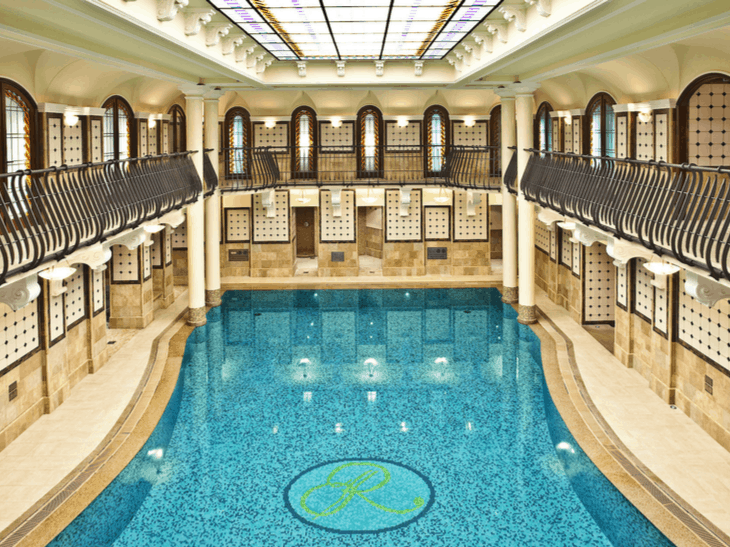 The Royal Spa, first opened in 1886, has been restored to its former glory.

A stay in Pest, on the other hand, deserves lodgings that live up to the area’s end-of-century grandeur. The palatial Corinthia Hotel Budapest is a genuine 19th-century landmark with Old World opulence befitting the Austro-Hungarian empire. During your stay it would be a sin not to treat yourself to a day at the on-site Royal Spa. Originally opened in 1886, the spa has been carefully restored to its former Art Deco glory with a stained-glass skylight, period features and a 15-metre swimming pool. You’ll leave feeling as pampered as princes. In the evening, head down to the Orfeum Club for glamorous revues and jazz concerts that doff the hat to the golden age of cabaret.

Conquer Castle Hill in a Morning 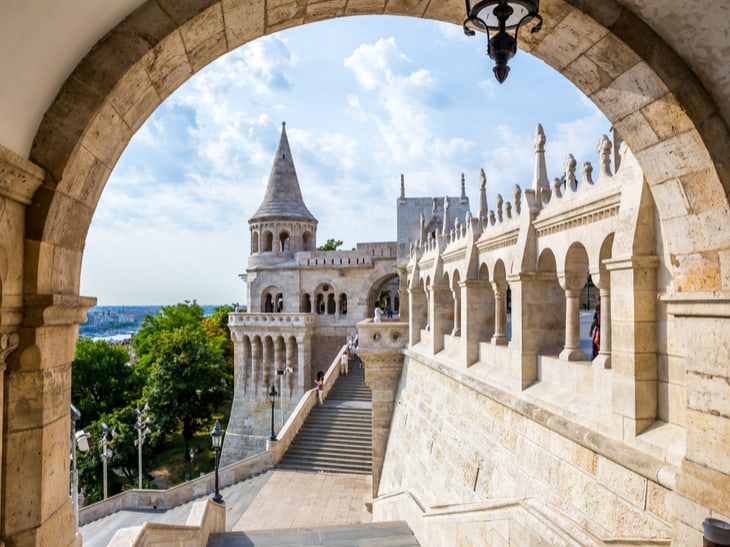 Fisherman’s Bastion is one of the top attractions at Budapest's Castle Hill.

Start the morning with a walk along the winding cobblestone streets of Budapest’s famed Castle district. They lead to a smorgasbord of architectural and historical wonders, making it easy for visitors to tick off many of the capital’s top sites in an afternoon. The stately Buda Castle, home to Hungary’s former kings, houses the National Gallery and History Museum, both open to the public. Fisherman’s Bastion is a white-bricked tower that might have been plucked straight out of a Disney fairy tale. While the neighbouring Matthias Church is a Neo-Gothic marvel of ornate, spindly turrets and colourful tiled roofs. Aficionados of illusion and escapology may also wish to buy a ticket to the House of Houdini, a museum in the area dedicated to the life and works of one of Budapest’s most famous sons.

Go to Wrack and Ruin in a Ruin Bar 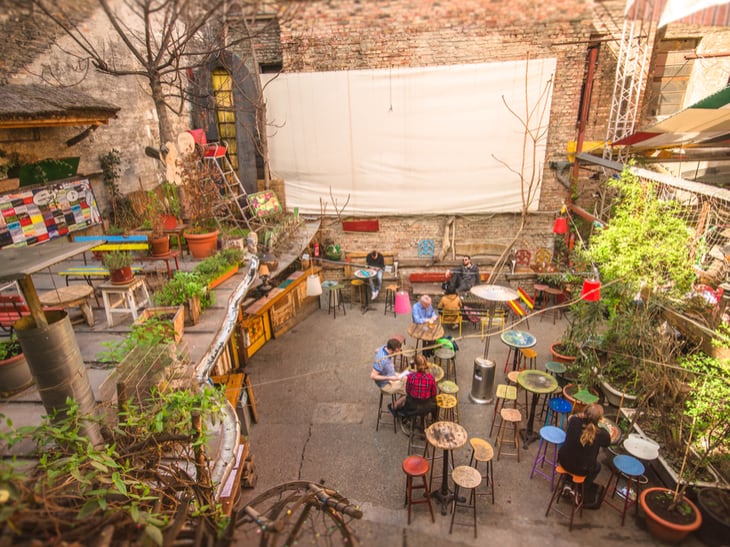 One of Budapest's ruin pubs, the Szimpla Kert.

In its attempt to gentrify the city’s urban decay, Budapest created its most idiosyncratic attraction: the ruin bar. These cobbled-together spaces quite literally hijack ruins – abandoned warehouses, empty parking lots, historic buildings – and transform the shabby interiors into a wonderland of kitsch fairy lights, patchwork vintage furniture and peeling paint. Grab an ice-cold craft beer and soak up the madcap atmos in some of downtown Budapest’s most loved watering holes, including Szimpla Kert, Csendes Létterem and Púder Bárszínház. 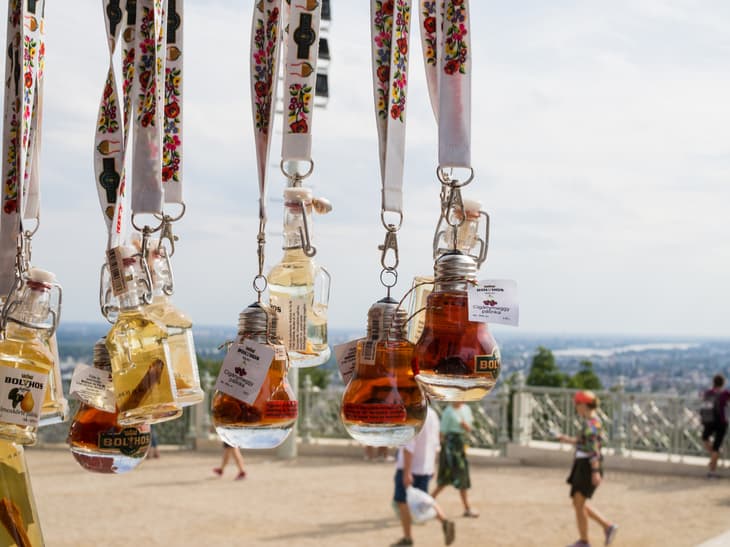 When visiting any local pubs, take the opportunity to taste Hungary’s national fruit brandy Pálinka. This potent spirit with silky hints of apricot, plum or cherry will hit you like a bolt of electricity. If you're looking to curry favour with the bar staff, then try asking for a glass of Pálinka in Hungarian using the phrase: 'Rendelhetünk egy pohár Palinkat? (ren-del he-tonk edge po-hahr po-lin-ket?) Pronounce it well enough, and who knows, the barkeep may even give you a cheeky shot on the house.

Want To Experience the High Life in Budapest?

Then join Azure X to do it the right way

Banquet on the Blue Danube 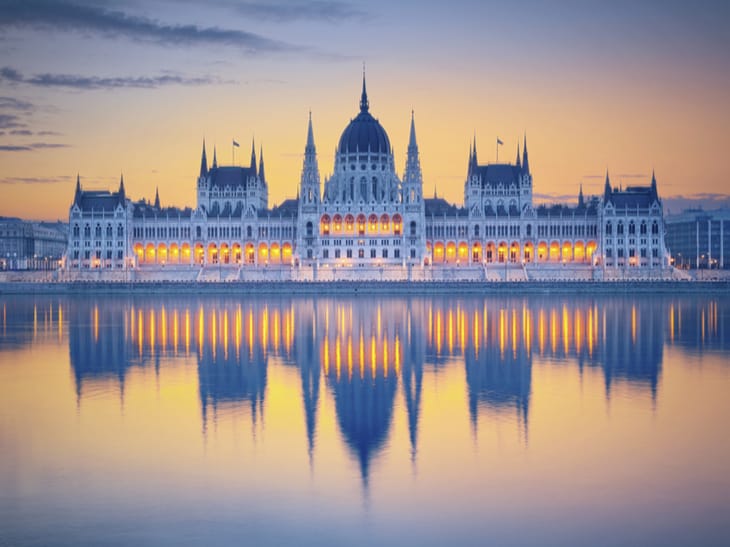 The Hungarian Parliament, one of the historic landmarks on the Danube River.

Any Budapest visit deserves a traditional Magyar feast on a floating restaurant docked by the banks of the Danube. Spoon is one of the more popular boating eateries that enjoys a beautiful view of the river, Hungarian Parliament and Buda hills. Some ferry operators even organise dinner cruise nights on the Danube. Hungarian cuisine has a rich history. Among its most celebrated dishes are the national staple goulash, stuffed cabbage leaves and a cinnamon coated chimney cake. The gastronomically cautious will be relieved to hear that many establishments also serve typical International and European options. Once the sun sets, Buda’s historical landmarks are floodlit and glow brighter than a gilder’s workshop under the starry night sky, transforming your Danube dining experience into a truly magical one. 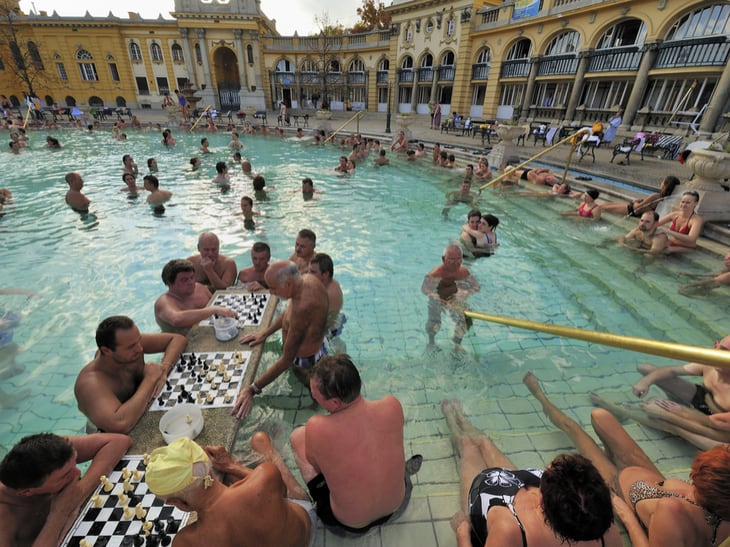 Budapest hasn’t been dubbed the City of Baths for nothing. Turn any random street corner and it’s probable you’ll stumble across another outdoor pool packed with disrobed locals simmering in piping hot thermal baths. The biggest and most popular of these open air sauna baths is by far the Szechenyi, which welcomes hundreds of visitors each week. The Szechenyi baths have also become a crowd-puller thanks to its chest-high chess boards scattered around the huge pool within this architectural must-see. So while you let the bath’s high-mineral content do its therapeutic magic, why not try to checkmate a stranger?

Slip into a Bohemian Narnia 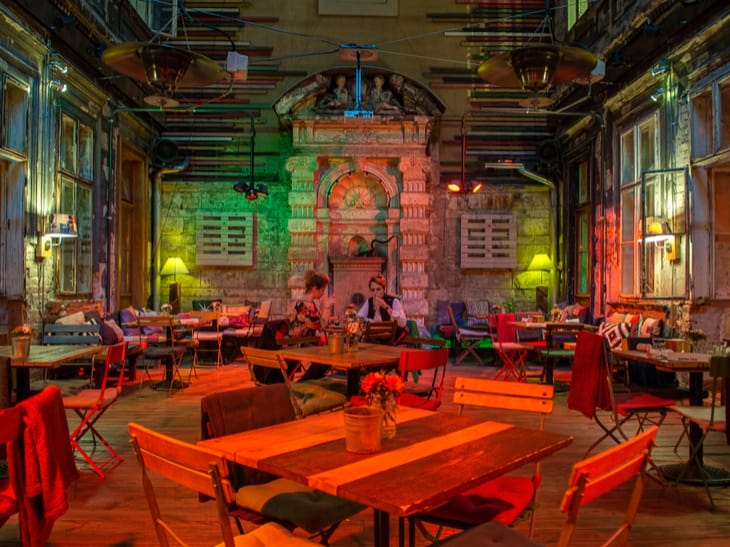 Brody studios is usually a members-only club but its events, including live music, are open to all.

Behind a nondescript door on a dull grey street in Budapest’s VI district lies a bohemian Narnia where fin de siècle decadence meets quasi Cuban aestheticism. Brody Studios is a members-only arts club that hosts a diverse cultural calendar open to all. On any given evening you’ll experience alchemy cocktail sessions, music concerts, comedy nights, movie screenings, literary events and much more. With its mural stairwell, bric-à-brac ornamentations and magical central courtyard, this secret club is an Instagrammer’s paradise. (Top tip: make sure to book ahead as events here fill up fast.)

From its dramatic history and magnificent architecture to its opulent spas and vibrant nightlife, Budapest has something for holidaymakers of all types. Take your Budapest city break to the next level of luxury by joining Azure X today.