Why is Sunseeker the Benchmark in Luxury Yachting?

What do Aston Martin and Sunseeker have in common? Aside from being iconic British brands steeped in history, both are synonymous with James Bond. Because wherever 007 is heading in the world, he’s expected to arrive with a certain sense of style and luxury. It’s therefore no surprise that Bond – and the rich mega-villains he faces – choose to conduct water based travel aboard vessels from the world’s premier motor yacht builder, Sunseeker.
Share this article 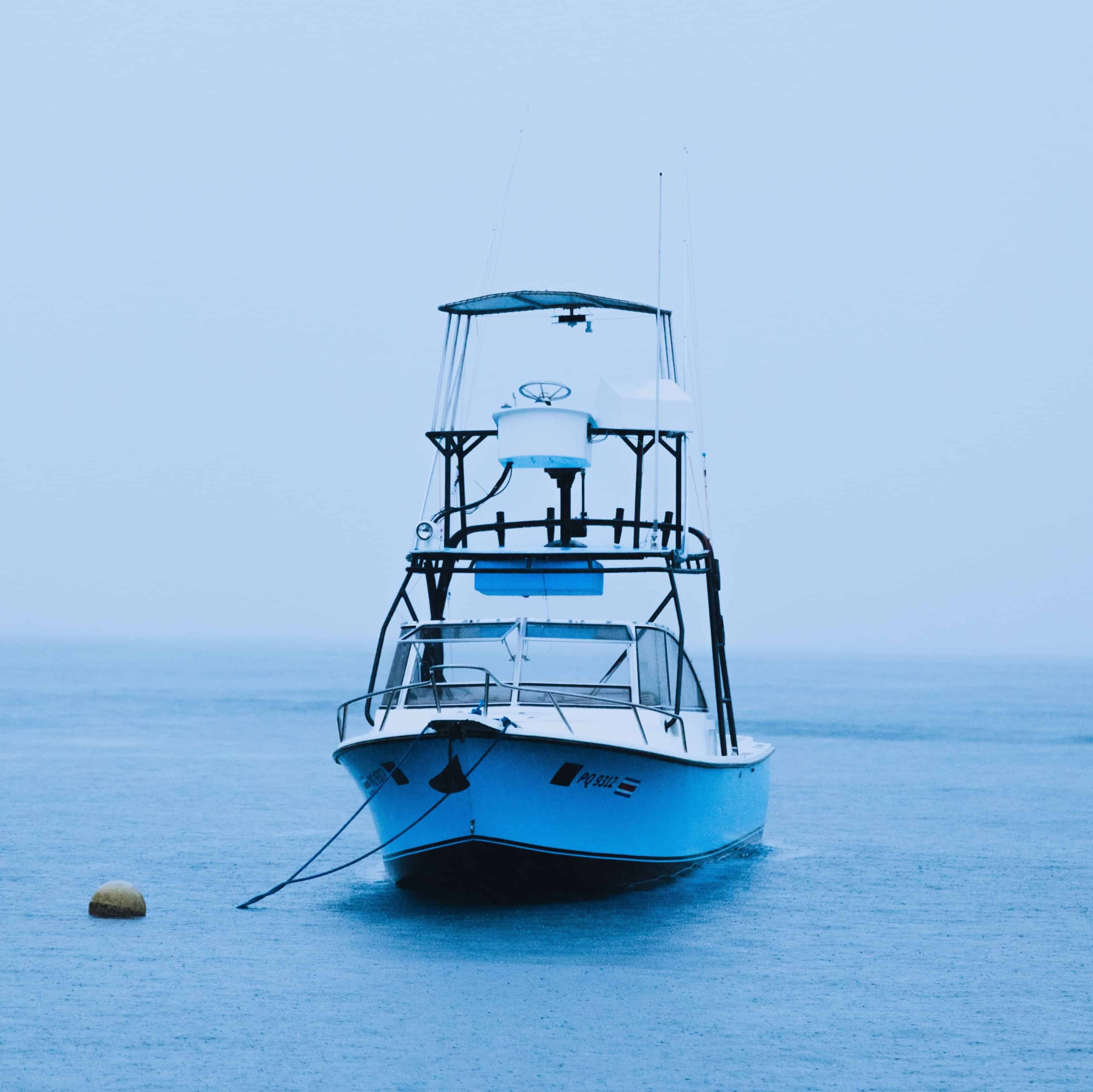 Sunseeker’s roots can be traced back to 1969, the English seaside town of Poole, Dorset, and the dreams and aspirations of a single man, Robert Braithwaite.

In the 1960s Braithwaite worked for a company selling boats in the UK. When one of the company’s suppliers, Owens Cruisers Inc. – an American boat builder of small personal vessels – decided to end distribution of their crafts to Europe, Braithewaite saw an opportunity.

He raised funds and headed to Owens’ offices in Arundel where he negotiated an agreement to acquire their boat moulds. And so began the journey to follow his dream. To build a new kind of boat. A Sunseeker. 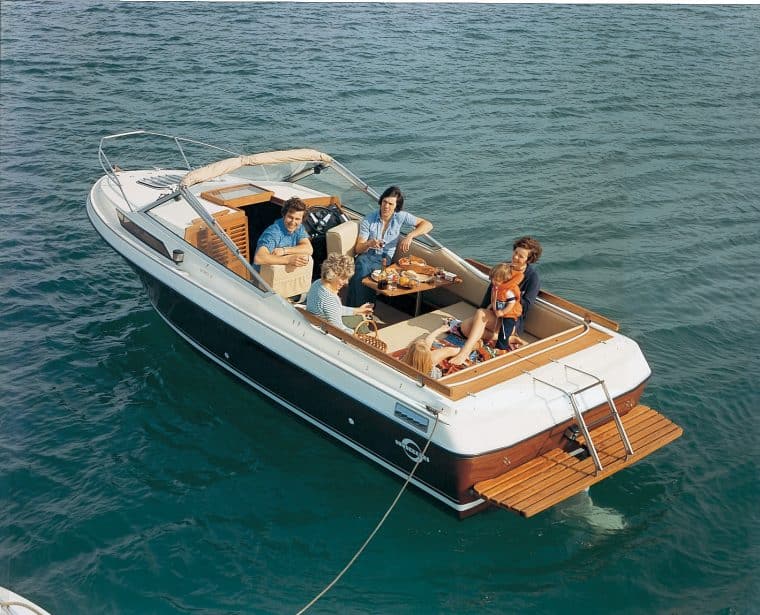 By using revolutionary technology and materials, the early designs were able to be tailored to the wants and desires of a handful of customers, keen to embrace this new found freedom in boat design.

The first craft to launch was the Sunseeker Sovereign 17, a boat that looks as exquisite today as it did when it was first launched in 1971. Watch Quantam of Solace and you’ll find Daniel Craig’s Bond relaxing in the back of a Sovereign 17, while none other than Robert Braithwaite himself is at the helm. 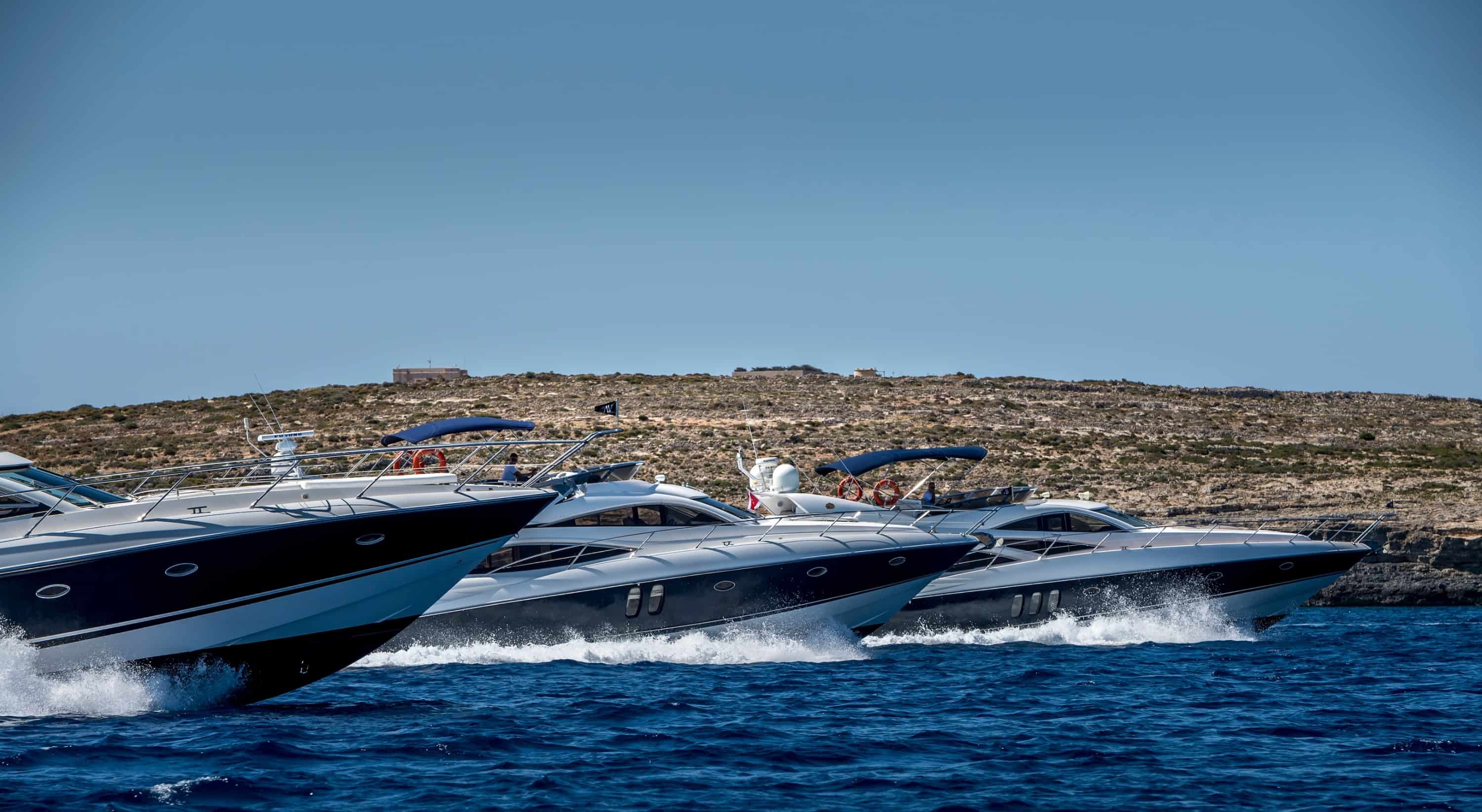 Thanks to continuing input from customers – such as Formula One driver Henry Taylor who requested a boat large enough to accommodate a full width sunbed – the Sunseeker range continued to grow and develop. By the late seventies, Sunseeker were selling well in the UK and northern Europe.

But the company yearned to be the first to break into the burgeoning market of Mediterranean destinations. To do so, they decided to create boats that combined the high end style of the lines already in place with racing capabilities.

Enter leading boat designer, Don Shead. Shead had designed racing boats and superyachts in the past, but never a production cruiser. By combining Sunseeker’s vision with his own unique skills, a totally new kind of cruiser was born.

Find Out For Yourself How Luxurious A Modern Sunseeker Is

With Azure X, you can have access to the finest Yachts.

The ultimate in luxury and performance

The Sunseeker Offshore 28 was the first boat of its kind made in Europe. The company’s first true performance model, it would go on to win sales in the south of France and Spain, and proved the launching point for the company as Sunseeker International.

While the innovative hull designs would raise the bar for performance standards, Sunseeker’s quality finish and unmatchable style was doing the same for motor yacht luxury. 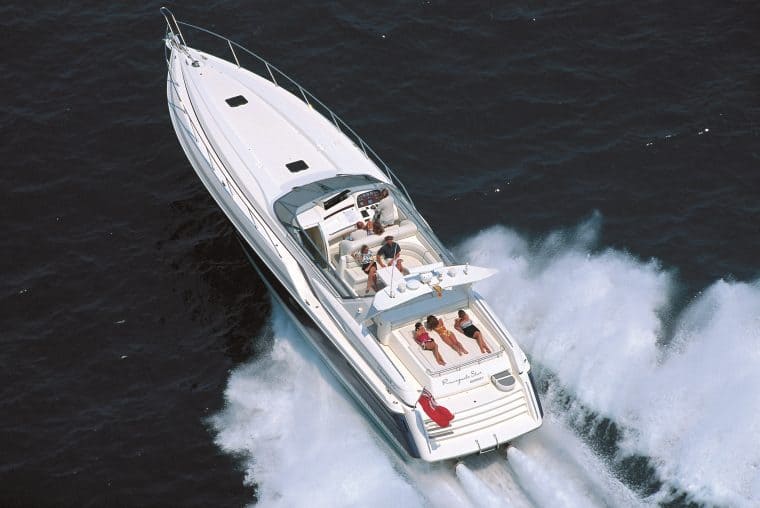 With the Portofino 31, the focus shifted to cockpits that could host large groups of people. When customers asked for larger boats, the Renegade 60, the first Sunseeker with twin jet drives, was born.

By the time the Predator 80 appeared – with its triple Arneson surface drives and the most sumptuous interior yet seen in a Sunseeker – the company had carved out a reputation as one of the world’s leading boat builders.

To this day, Sunseeker has continued to focus on delivering boats that match the desires of its customers. By combining opulent accommodation, incredible performance and range and handling like never before, Sunseeker remains the benchmark in luxury boating.

A reputation for quality 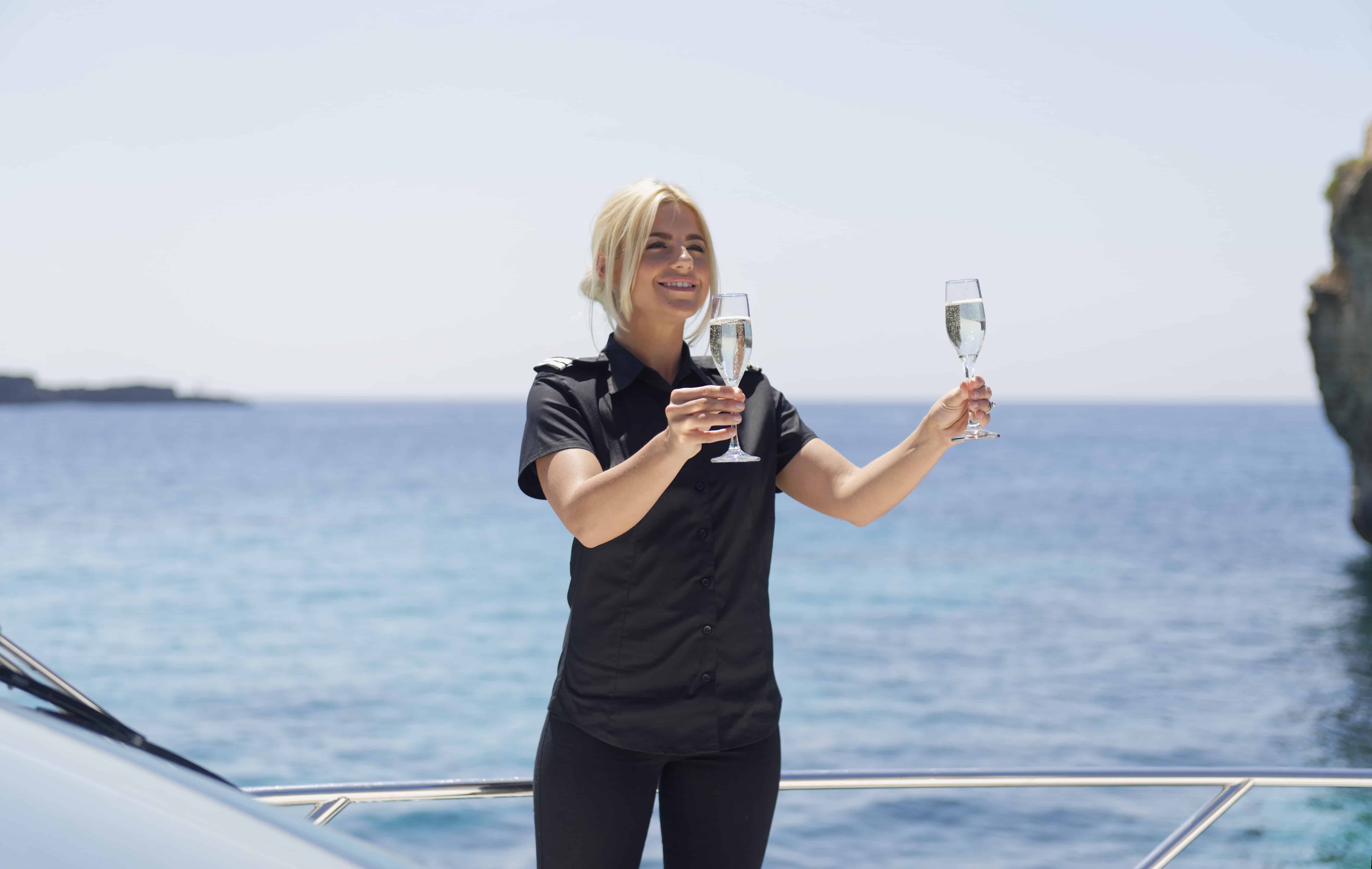 Today, Sunseeker International employs a dedicated team of over 2,500 staff, with highly skilled designers, engineers and a worldwide support network. Undoubtedly their most important staff though, are their master craftsmen.

While Sunseeker uses groundbreaking technology to design their boats, they’ve eschewed automated assembly lines, preferring to stay committed to hand built boats. Because to achieve the level of extraordinary detail, finish and artistry required on a Sunseeker, only a human hand will do.

And it’s for all of the above – the luxury, the style, the British heritage – that Sunseeker has remained the boat of choice for numerous Bond films. Whether it’s the Superhawk 34 speeding down the Thames in The World Is Not Enough, Le Chiffre’s Predator 108 in Casino Royale or the Superhawk 43 in Quantam of Solace, Bond and Sunseeker are never far apart. 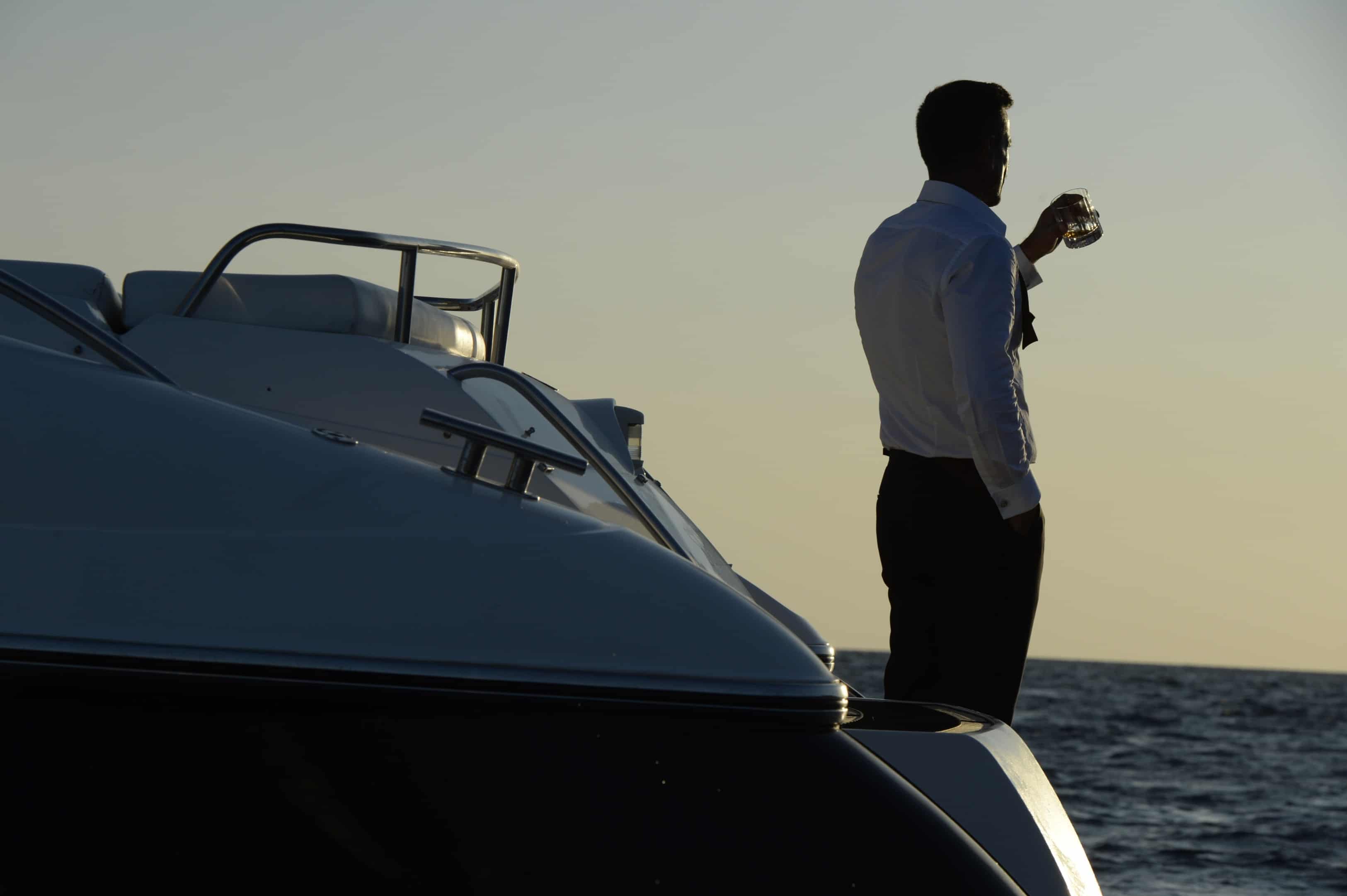 Whilst Sunseeker is a truly British brand, there’s no denying that to make the best use of their boats, one should head for sunny climates. The company is called Sunseeker after all!

James Bond may be happy racing along the Thames, but the rest of us would no doubt prefer to kick back aboard a Sunseeker with the sun above and clear blue seas below.

Via Azure Ultra you could float away to dreamland via a fleet of Sunseekers located in the Mediterranean Isle of Malta. Equipped with your own crew, including personal captain, steward or stewardess, a Sunseeker charter is the ultimate seafaring luxury escape.

Cancer Has Made Me Want to Travel More

9 Reasons to Convert to the Motorhome Holiday