To most Europeans, Scandinavia remains a vast wintry wilderness beleaguered by perpetual, insomnia-inducing polar nights. But head to any of Scandinavia’s cities and you’ll be greeted by vibrant urbanscapes bursting with myth, history and innovation. Join us as we timehop across three pivotal ages that defined the spirit, culture and aesthetic of Denmark, Norway and Sweden. Along the way leapfrog between a trinity of capital cities to discover Viking relics, royal necropolises, medieval town centres, neo-futuristic wonders and other uniquely Scandinavian marvels. 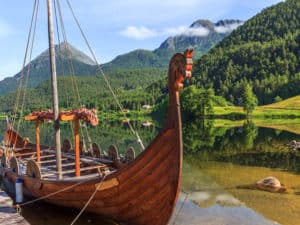 Long before Norway, Sweden and Denmark were forged into independent nations, amorphous Scandinavia was a realm of Vikings. In this rural no man’s land, these burly barbarians clustered into small agricultural settlements or they lived along the coast by fishing. Their language was Old Norse and their morally ambiguous pantheon of gods, elves and frost giants populated nine worlds in a sprawling cosmos connected by the immense ash tree of Yggdrasil. With such evocative lore, it’s no wonder the Vikings have transcended the pages of the dusty history tomes to take on the elusive quality of myth. Thankfully, there are plenty of unearthed artefacts that shed light on their legacy. Journey into the Viking age with a trip to these epic sites. 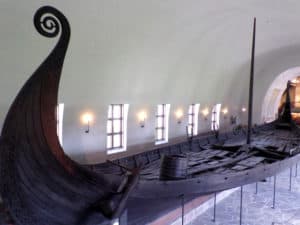 The Vikings’ curlicued longships were not only seafaring vessels. With the passing of notable chieftains, select ships would be hauled ashore and used as grandiloquent centrepieces in ceremonial burials. Mourners would load the hull with food, jewels, weapons and even a few dogs to keep the deceased company during passage into the afterlife. Survey three of Norway’s funereal vessels—Gokstad, Tune and Oseberg—at Oslo’s Viking Ship House. Discovered in the Oslofjord, these ships were lovingly restored to recapture their former glory. The museum also houses the largest collection of Viking-age artefacts ever uncovered in Scandinavia. 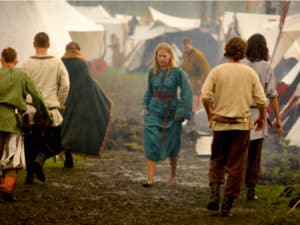 Step through the mists of time and experience Danish Viking heritage with a trip to Frederikssund village. This reconstructed settlement consists of five pit-houses and a 25 m longhouse, once permanent housing for Viking lords. Every summer, the village hosts a spectacular open-air festival. Over 250 adults and children don period duds and take part in an immersive three-day theatre experience based on epic Norse tales. As the drama unfolds, festivalgoers enjoy battles and games, historical re-enactments and torchlight processions. A unique opportunity for all the family to relive Viking days of yore. 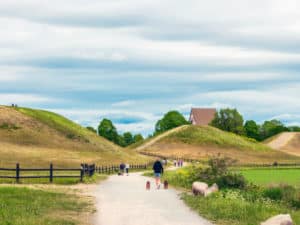 The hills of Thor, Odin and Freyr

Pay your respects to Norse gods and Viking elders with a trip to the mystical burial site of Gamla Uppsala. Legend has it that the three main hills belong to the gods Thor, Odin and Freyr. Others say the hills contain the remains of the Ynglinga kings Aun, Egil and Adils, of Beowulf and the Ynglinga Saga fame. Go for a stroll along the famed ‘pilgrims path’, take in primeval panoramas and cast your mind back to an age of pagan magic and ritual. The on-site museum offers further insight into Viking culture and lore. 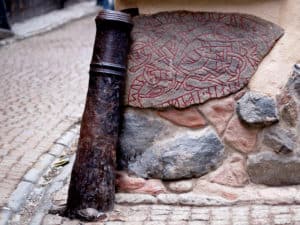 A walk around Stockholm will bring you face to face with a who’s who of Norse gods. Head to Mariatorget garden to admire mighty Thor wielding Mjölnir against the serpent Jörmungandr; and outside City Hall is the thunder god’s eternal frenemy Loki being punished by venomous snakes. Spy Heimdall blowing his Gjallarhorn and goddess of war Freya on Djurgårdsbron bridge. For a glimpse of the one-eyed All-Father Odin head to the National Museum. You’ll even come across a genuine ancient runestone set in the corner wall of Prästgatan and Kåkbrinken lanes in the old town. 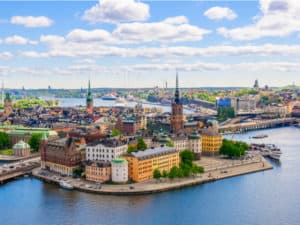 While Denmark, Norway and Sweden had evolved into independent kingdoms, the three neighbours decided to unite under a single monarch in 1397 to block Germanic expansion into the Baltic region. The united front was not quite so united behind closed doors, however. Diverging interests—especially between the Swedish and Danish nobility—incited several bloody wars. The election of Gustav Vasa as the first king of Sweden eventually put the fraught alliance out of its misery once and for all in 1523. Trace Scandinavia’s struggles, triumphs and growing pains in the well-preserved old quarter townscapes of Stockholm, Oslo and Copenhagen. 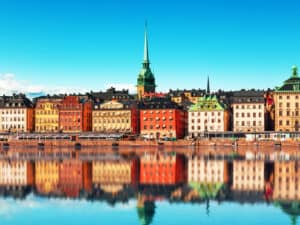 Don’t be fooled by the quaint charm of present day Gamla Stan (old town). Since 1252, these cobblestoned quarters have seen enough bloodshed to make even the hardiest of Game of Thrones fans squeamish. Stortorget square was the stage for 1520’s infamous Stockholm Bloodbath, when Danish King Christian II beheaded 82 Swedish noblemen. This massacre led to Sweden rebelling against Danish rule and appointing its first king. The rococo Kungliga Slottet is one of the world’s largest palaces. Enter inside to explore the Treasury, Queen Kristina’s throne room and much more. And on the annexed islet of Riddarholmen, lies a striking medieval abbey and royal necropolis built by greyfriar monks in the 13th century. 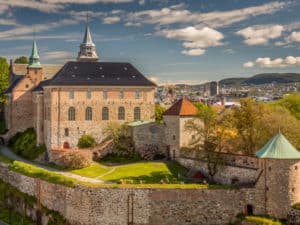 Although the wisps of Oslo’s story began to take shape in the Middle Ages, a dramatic fire in 1624 razed much of its medieval heritage to the ground. Oslo underwent a phoenix transformation under Dano-Norwegian King Christian IV who rebuilt the city below Akershus Fortress. Several well-preserved historic buildings can still be seen in the Kvadraturen (the quadrant), including Oslo Cathedral, with its sky-scraping steeple and Café Engebret, Oslo’s first town hall. This eatery was a favourite haunt of illustrious Norwegian artists such as playwright Henrik Ibsen and symbolist painter Edvard Munch. The Fortress itself encapsulates 700 years of Norwegian history with renaissance-styled chambers, lavish banquet halls and the mausoleum—final resting place of several royals. 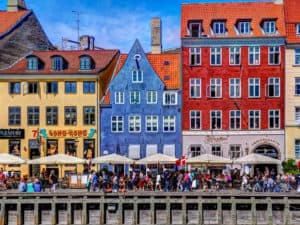 Copenhagen’s postcard-perfect canal has a history that is as colourful as its harlequined townhouses. The man-made Nyhaven (new harbour) was built by King Christian V between 1670 and 1673, using Swedish prisoners. The harbour district fast became a stomping ground for ale-quaffing sailors and seductive ladies of the night. Building no. 9 has remarkably remained unaltered since 1681, and fabulist extraordinaire Hans Christian Anderson lived in several lodgings here over a period of 20 years. “The Tinderbox”, “The Princess and the Pea”, and many more of his timeless fairy tales were written in no. 20. The nearby 17th-century Charlottenborg Palace was residence of Ulrik Frederik Gyldenløve, the illegitimate son of King Frederick III of the Dano–Norwegian Realm. 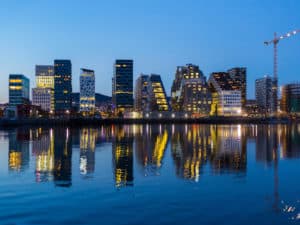 The dawn of the 20th century saw the architectural zeitgeist throughout Scandinavia shift significantly. Architects began rejecting classicism in favour of homegrown innovation. This set the stage for an idiosyncratic style of Scandi architecture that blended the organic curves and sleek lines of minimalism with nature-embracing functionalism. The last couple of decades alone have seen a flurry of neo-futuristic high-rises, concert houses and office complexes sprout up across Stockholm’s, Oslo’s and Copenhagen’s skylines. So get your cameras at the ready and prepare to snap some truly state-of-the-art Scandinavian masterpieces. 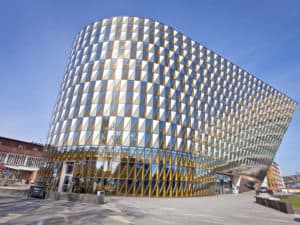 Reaching lofty heights of 117 m, the Victoria Tower is Stockholm’s tallest hotel. The soaring structure, wrapped in tri-coloured triangular glass panes, is particularly striking due its top-heavy prism peak that juts out into the sky. The Waterfront Congress Centre is the city’s most eyebrow-raising building. The low-rise auditorium, overlooking the icy Riddarfjärden lake, is crowned by mounting nests of gleaming metal spikes. For something a tad more graceful head to the Aula Medica. This lecture hall’s slanted glass façade curves and slopes with the gravity-defying, mind-bending stylishness of a collapsing Inception dream. 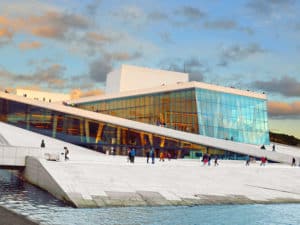 The iconic Opera House gave rise to the wave of innovation that swept through Oslo’s old industrial zones. The white marble-clad building is all dramatic slopes, gleaming facets and jagged angles, appearing like some techno-glitch iceberg floating on the Oslofjord. At its rear is a cluster of ziggurat high-rises atply nicknamed the Barcode Project. Each building plays with perception and geometry, injecting Oslo’s skyline with futuristic pizazz. Statoill, Norway’s largest oil and gas company, also threw its hat into the development race. Their oblong-stacked HQ looms over Oslo’s outskirts like a Bond villain’s lair. 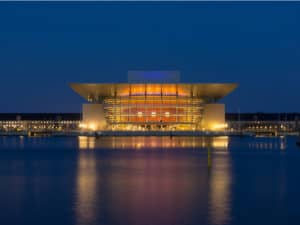 Copenhagen’s Opera House is both world-class theatre and architectural masterpiece. The imposing façade sports a sleek awning that slices through the air over the harbour, lending the building a hint of the Japanese dojo about it. The Royal Library—dubbed the Black Diamond due to its shiny blackmirror panelling—is another harbourside marvel. And Zaha Hadid’s neo-futurist extension to the Odrupgaard Museum is also a must-see. The exterior, reminiscent of a tank’s caterpillar tracks, is cast in black lava concrete, allowing the surface colour to subtly morph according to the weather.

Azure X has added eight Radisson Blu hotels located across Scandinavia to its growing hotel portfolio. X members can now book fabulous city-break stays in Sweden, Norway and Denmark. Boasting cutting-edge Nordic minimalist décor, these hotels arrive right on time for members to plan perfect Yuletide holidays for the family to explore magical Christmas markets that are the stuff of storybooks. Also included are a selection of hotels conveniently located in Stockholm, Oslo and Copenhagen airports, which are ideal for early morning, late evening or stopover flights. You'll feel like you are traveling like a celebrity! Book your Scandinavian city break through Azure X today.